The creation of Rolex and the men behind it 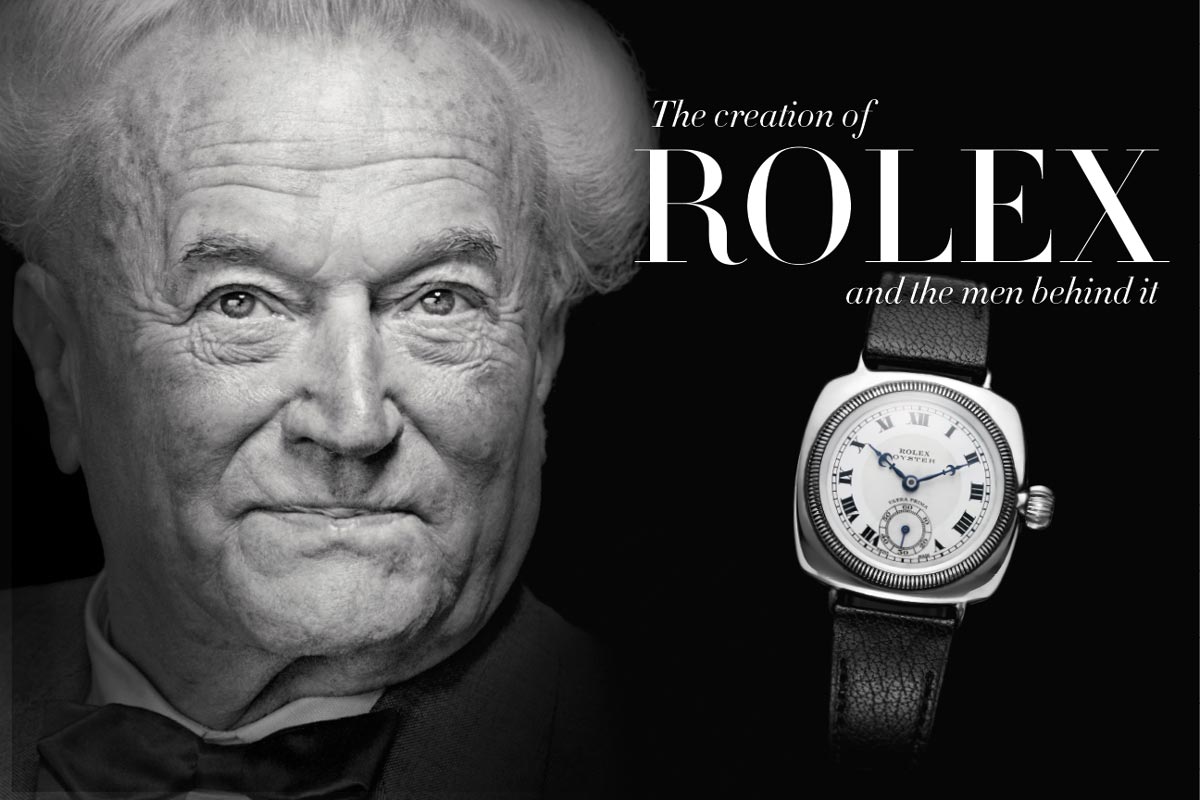 The worldwide name of Rolex represents quality, style, precision recognized by everybody everywhere, however his creator; Hans Wilsdorf forever linked to the Watchmaking industry to whom he established the importance of a brand and its founder is not easily recognized by who carried a Rolex wristwatch.

This history is the history of the first wristwatch Oyster created by Rolex and its founder; Hans Wilsdorf. This history is a tribute to a unique personality and its contribution and creation of Rolex. The pioneering watchmaking achievements and revolutionary human adventure.

Launched in 1926, the Oyster has become the precursor of legendary watches.

From Bavaria, Germany to La-Chaux-de Fonds

Hans Wilsdorf (1881-1960) came from Bavaria, Germany, and a career in watchmaking at La Chaux-de-Fonds.
A man ahead of his time, a visionary genius, he established all fields of the company’s activities and the creation that started with the name of “Rolex.” In a time when nobody ever thought about the concept and importance of a name, Hans Wilsdorf looked for a name that had only five letters, was easy to pronounce in any language, had a pleasant sound, and was easy to remember – and could be inscribed elegantly on the dial of a watch. and logo on the rolesor.

The 1900s, the beginning of Rolex history

In 1919, Hans Wilsdorf left England to settle in Geneva, where he founded Montres Rolex SA in 1920. The intention was to be closer to his supplier in Bienne. Geneva had an international reputation and watchmaking tradition. This crucial decision demonstrated Wilsdorf’s “strategic thinking.” He was an active personality unrestricted by borders.

The pocket watches to the wristwatch watches, a new era

Hans Wilsdorf foresaw the wristwatch as being an everyday necessity of the future with a particular appeal to women.

Back to 1905 when living in London, Hans Wilsdorf and his partner had founded the company Wilsdorf & Davis, which specialized in the distribution of wristwatches throughout Great Britain and the British Empire. Swiss partners produced some of the components, and among them was Maison Aegler in the city of Bienne, which later became Manufacture des Montres Rolex SA. At the time, they were the only manufacturers capable of producing the small, precise movements needed for his wristwatches. After incredible success and public acceptance, Rolex was granted the first certificate to produce such a watch by the Official Watch Rating Centre in Bienne. Four years later, the prestigious Kew Observatory in England gave its first “Class A”—a distinction hitherto reserved for marine chronometers, thus fueling the realization that wristwatches and chronometric precision could go hand in hand.

The challenge of waterproofing

The invention in 1926 of the “Oyster,” the first waterproof wristwatch in the world, proved entirely successful thanks to a case equipped with an ingenious system consisting of a screw-down bezel, case back, and winding crown.

With the “Oyster” and its innovative waterproof case, Rolex firmly established its name into the watchmaking history.

Besides his technical knowledge, Hans proved to be a marketing man

Hans Wilsdorf, in 1927, decided to prove the merits of the waterproof Rolex Oyster and to promote and make Rolex known worldwide. For that, Rolex hired Mercedes Gleitze, an Englishwoman who swam the English Channel for more than ten hours. To “hit” the world, Hans published a full-page advertisement in the front page of the Daily Mail, referencing the success of the watch with the title, “The Triumphant March of the Rolex Oyster Around the World.” The Testimony concept, a tool extensively used today in marketing started by this visionary men.

Ever since the testimonies and concept of famous VIP people are associated with Rolex and its events in a variety of social, cultural, and sports fields between the brand and who is well-known by trust, quality, and surpassed accomplishments.

In 1930, Rolex created the logo “crown” registered trademark on 1930. The same logo in the 1950’s was to identify the winding crown.
After that, Rolex created watches of high prestige that were worn by influential people, which rapidly become classics of the Oyster Collection followed by the birth of Oyster Perpetual Datejust. Due to its creator, Rolex established itself one step ahead of this industry. It was a brand that partnered with athletes, racing cars, yacht races, and expeditions in the constant evolution of quality, style, and precision.

Rolex’s creativity and close relationship to the new era started to develop, and Rolex designed watches for specific professionals, such as watches for pilots, divers, and scientists, to mention few.

The Consolidation of Rolex

When Hans Wilsdorf died in 1960, Rolex was well-known for its quality, style, and innovation. One step ahead of his time, this visionary man created in 1945 the Hans Wilsdorf Foundation, which became the owner of the Rolex company.
The Rolex creator’s legacy, his spirit of enterprise, his vision, and his dedication to pioneering conquered for Rolex an endless space in the watchmaking industry.

Rolex’s Approach to Sponsorship and Philanthropy

Between the 1960s and 1970s, Rolex pioneered and partnered with institutions and world-famous artists.
The company’s robust sponsorship culture, its philosophy, and its guidelines have always improved and maintained the leadership of Rolex. More than a company, Rolex represents the traditions established by its creator, Hans Wilsdorf, a man ahead of his time. n