The enchanted capital of Bahia

Salvador is the capital of the state of Bahia, Brazil. With a charming Old Town, a vibrant musical scene and popular Carnival celebrations, it is considered one of the birthplaces of Brazilian culture. With the slogan: “Have you been in Bahia?” The enchantment of this magic city has been strong enough to make Germans, French, and Italians to move here and stay for good. Bahia has 365 Churches, one for each day of the year. True or not, it is difficult to know for sure. Many of the churches have their interiors painted in gold. 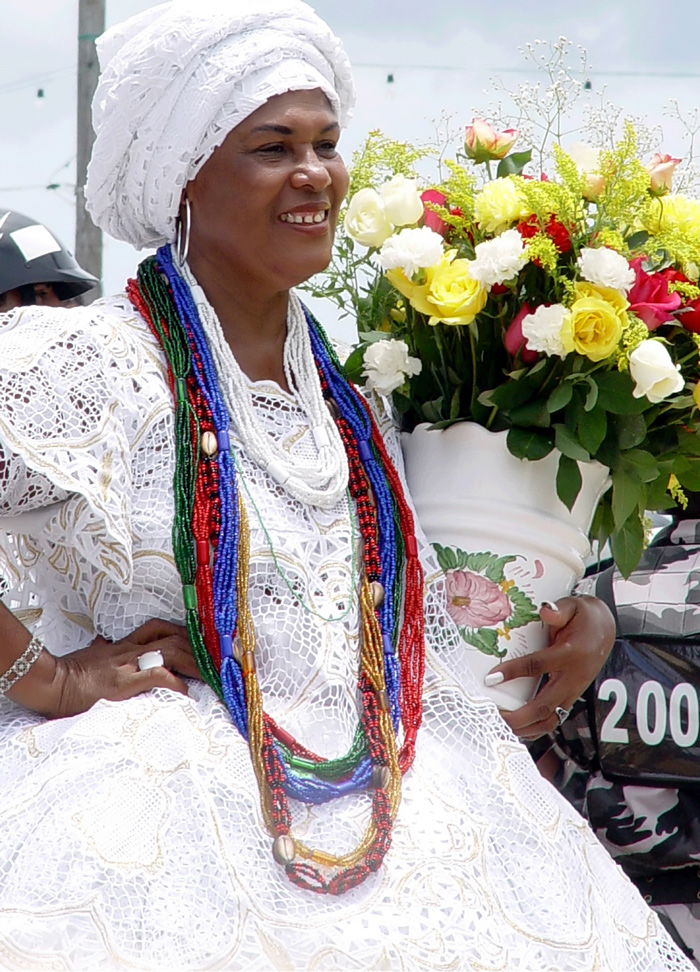 The land of “Capoeira” Capoeira is a martial art, brought by African slaves. Its former master, Mr. Pastinha, once explained the original intention of this dangerous martial art. At the time, slaves, during the dance, used to fight with a knife between their toes, with the intention to kill. From those days to now, it remains only as the most incredible and beautiful dance, that only very well prepared and conditioned people perform this practice. 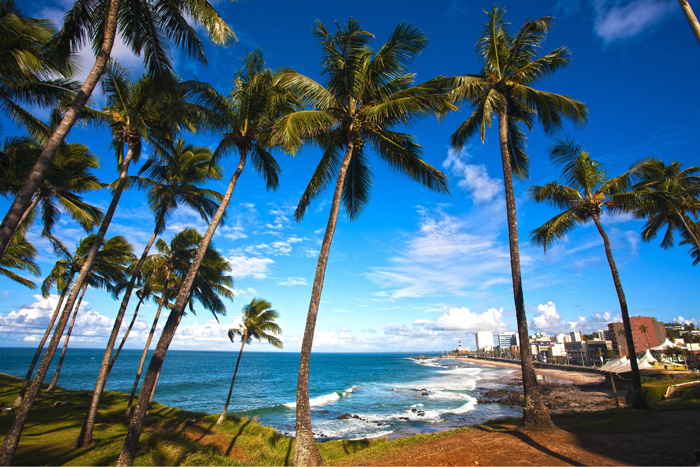 Founded in 1549, Salvador was the capital of Bahia in the heyday of the slave trade. The legacy remains today in its large black population, and the resulting culture in many ways outshines the rest of Brazil. It’s a vibrant, exciting city, and its people are quite friendly. In music, many of the greatest names from the mid-20th century to the present hail from Salvador, such as Dorival Caymmi, Gilberto Gil, and Caetano Veloso. In literature, the late Jorge Amado ,novelist and poet, was also from the region. 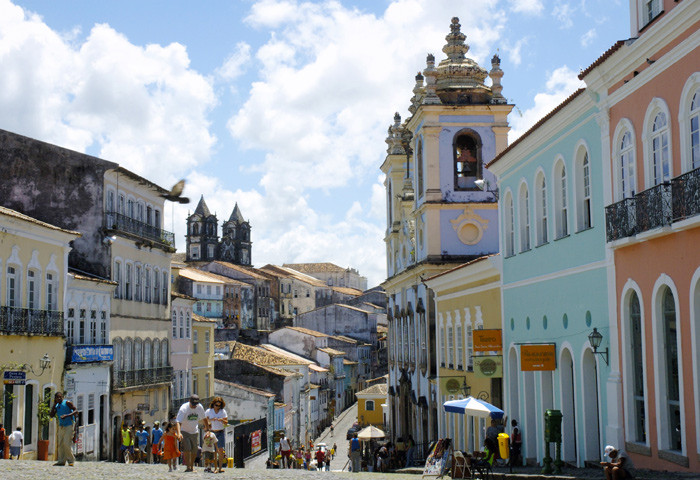 Salvador is on a peninsula on the northeast coast of Brazil which shields the large Baía de Todos os Santos (“All Saints Bay”) from the Atlantic Ocean. The city is the third largest in Brazil, sprawling for dozens of kilometers inland from the coast. Most visitors head for the coastal neighborhoods that cluster around where the bay meets the ocean. Salvador, Brazil, has a tropical climate including rainforests and lush vegetation.

A 100m cliff runs along the entire bayshore, dividing the city into Cidade Alta, up on the cliff, and the Cidade Baixa down by the bay. The former features Pelourinho, the old city center, which packs historical sites, colonial architecture, museums, restaurants, bars, hostels, artisanal shops, and music/dance/capoeira academies into a convenient, albeit tourist-swarmed, set of winding cobblestone streets. The latter features a commercial center with lots of bus traffic coming in from all over Salvador.

Outside of this area, there are many beach districts that stretch from the tip of the peninsula northeast along the Atlantic coast. The Barra neighborhood at the tip of the peninsula is the main alternative jumping-off point to Pelourinho, and a little further to the northeast are the hip neighborhoods of Rio Vermelho and Amaralina, which feature a nightlife less geared to the foreign tourism industry. Beyond these is the neighborhood of Itapuã, which has an energetic beach side nightlife and relatively few foreign visitors. Northward from there are kilometers and kilometers of gorgeous beaches. 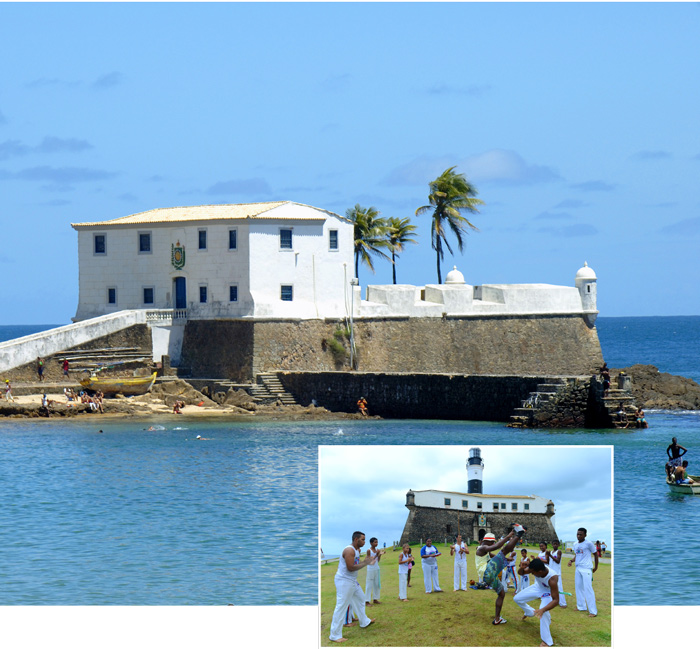 The bayshore coast north beyond Pelourinho features a more tranquil atmosphere and a locally patronized, though less scenic, beach life. The interior of Salvador is where the “new city” has developed, full of residential neighborhoods, shopping megaplexes, and knotted highways, all of which can be quite intimidating without actually having a friend to show you around. 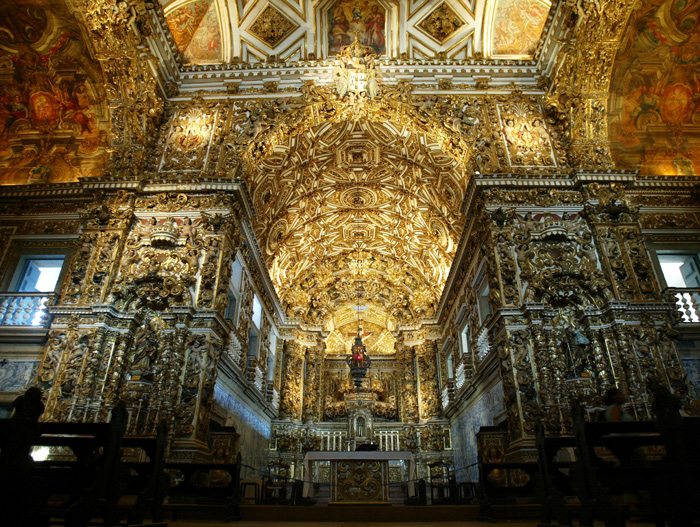 Local residents enjoy sharing their exotic dancing and music skills with tourists. Carnival in Bahia, means that for almost six months you can find one, in the countryside, called Micareta. Residents are also considered some of the friendliest people on the planet. Tourists are welcomed with friendly and open arms by the majority of local residents.

The people of Salvador, as other people from the state of Bahia, have a reputation of being relaxed, easygoing, and fun-loving, even by Brazillian standards. On the negative side, this is also interpreted as laziness; in a way, people of Salvador have a reputation opposite of people from São Paulo. It’s questionable whether this reputation is true, as the behavior of pedestrians and drivers in traffic seem to contradict this. Regardless, few soteropolitanos seem to bother with this reputation, even the bad part of it, and some even make fun of their own supposed laziness. Also, most people in Brazil agree that soteropolitanos are generally friendly and warm people. 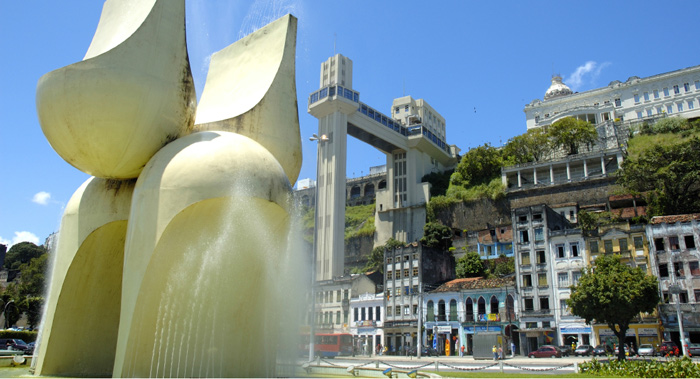 Brazil is a country of social inequality, but in few places is this as evident as in Salvador. The social segregation is also evident, with large numbers of upper middle class and upper class citizens living in gated communities, which is in contrast to the huge slum-like neighborhoods located in the elevated areas. 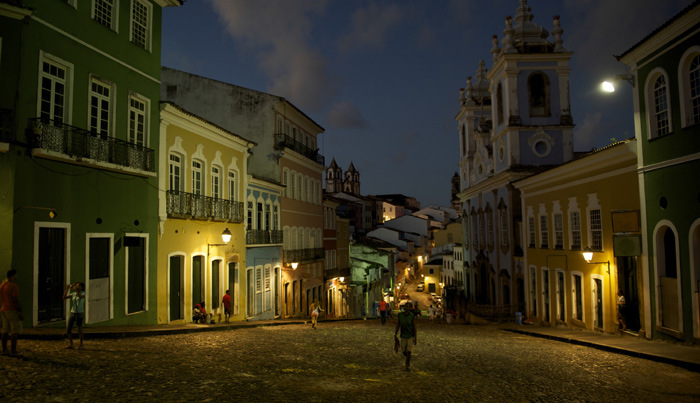