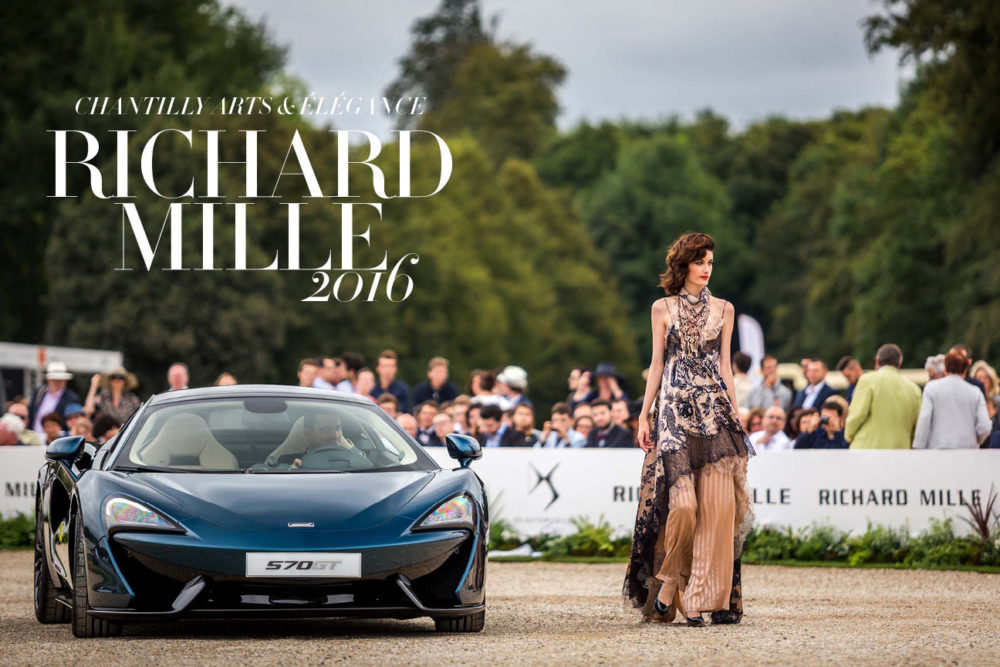 Chantilly Domaine recently closed their gates to promote an excellent two days event. During this autumn weekend a veritable, though temporary, and an open-air museum of automotive wonders.

More than 13,500 people joined Richard Mille to celebrate this 3rd edition of the Concours d’Élégance. Considered one of the world’s finest, as the specialist press and collectors unanimously—and freely—concur. 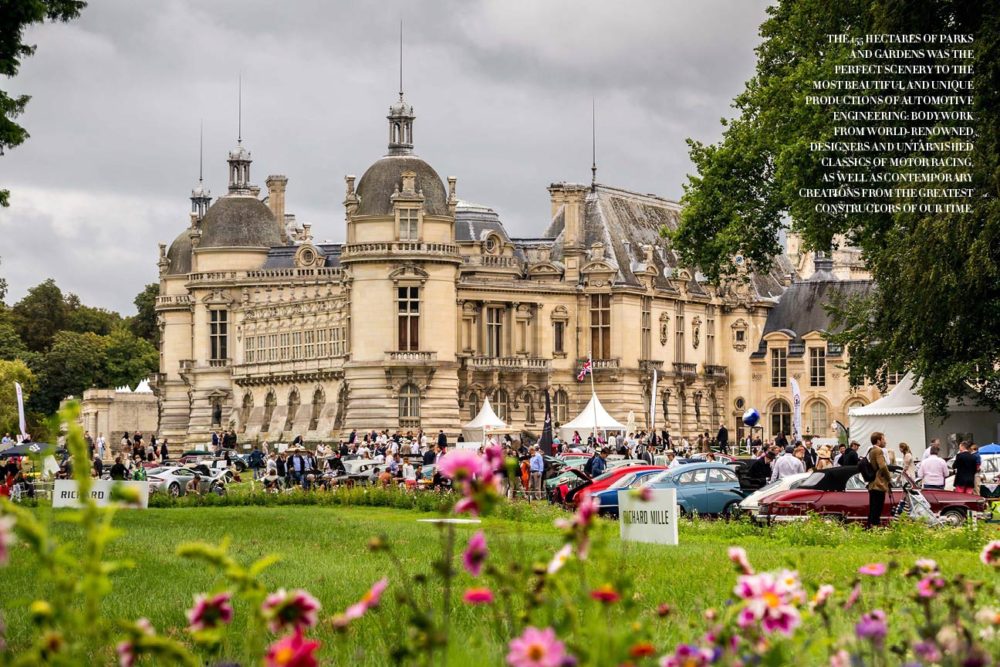 The traditional classic car rally with the most beautiful cars in the world. One novelty this year was the second race, devoted exclusively to SuperCars and UltraCars from the ’80s through today, which allowed 25 gentlemen drivers to discover the countryside around Chantilly. The drivers behind their rare wheels enjoyed the Mortefontaine testing circuit. The 155 hectares of parks and gardens was the perfect scenery to the most beautiful and unique productions of automotive engineering: bodywork from world-renowned designers and untarnished classics of motor racing, as well as contemporary creations from the greatest constructors of our time. The Italian manufacturer MV Augusta delighted the visitors and the press with the new ‘atelier’ motorbike by Zagato.
The work of the master coachbuilder from Milan which took its world premiere at Chantilly. During the 3rd edition of Chantilly Arts & Élégance by Richard Mille, it was also an occasion to celebrate the 50th career anniversary of FIA president, Jean Todt. The author of many motorsports tours had its emotional reunion to his former racing cars—the famous Scuderia F1, the legendary Peugeot 205T16 and the 504 Rallye Groupe 4—to which he delivered first prize in the category devoted to his career.

Connoisseurs and families alike were charmed by a program celebrating at once the greatest artists of automobile history. The opening of “The Grand Condé, rival of the Sun King?” exhibition in the Jeu de Paume Hall, Versailles revealed to the public more than 120 works and historical documents of great importance, including prestigious loans from some of the most famous museums in France and abroad.

The event “ Chantilly Arts & Élégance” festivities gathered together 40 experts on the field. Jean Todt, was called upon to pass judgment for three automobile competitions: the Concours d’Élégance to distinguish constructors and its futuristic vehicles; the Concours d’État, reserved for collectors of classic cars and the Grand Prix des Clubs, which rewards those who keep the history of the automobile alive. 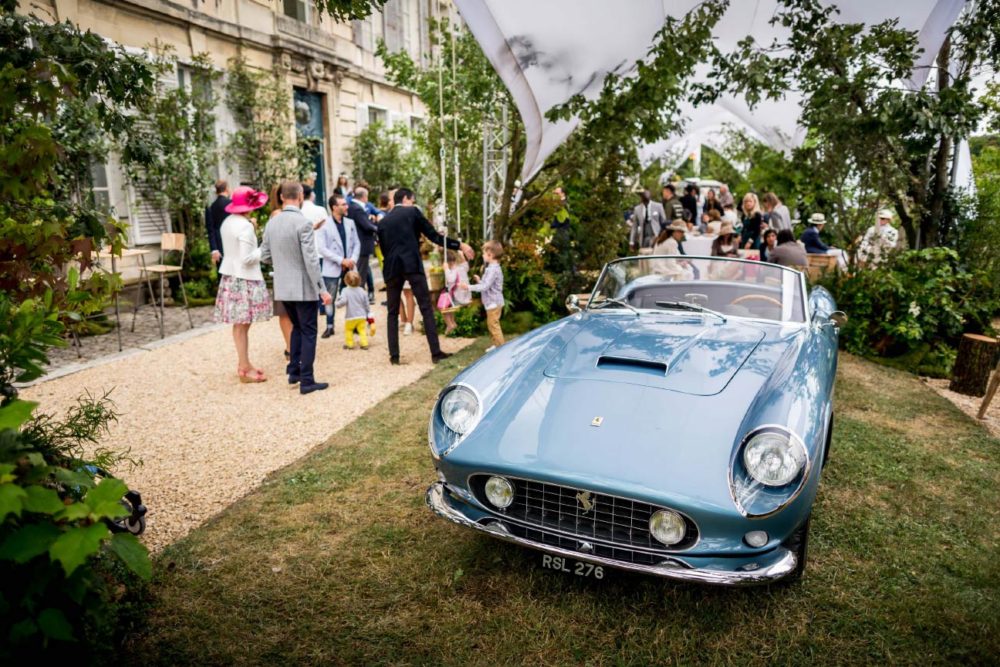 Alongside a model was wearing a dress by couturier Eymeric François. He received top honors from the assembly, along with the most prestigious prize: the Concours d’Élégance, which brings together the respective aesthetics of high fashion and concept cars. Next, a hundred cars judged in the context of the Concours d’État, on the criteria including any restorations. Also their condition and their historical significance. The Richard Mille “Best of Show” prize was awarded to an Alfa Romeo 8C 2900B from 1938, with Touring bodywork. The Concours des Clubs brought together 800 cars representing 40 different clubs, and evaluated not only their presentation and the quality of restoration, but also their mise-en-scene as part of an elegant “picnic on the grass.” This year’s winner was the Club Amicale Tricyclecariste de France.

The 4th edition announced by Richard Mille and Peter Auto will happen on September 10th 2017 at the Château du Chantilly, gathering Fashion, beautiful cars and famous faces in the country. 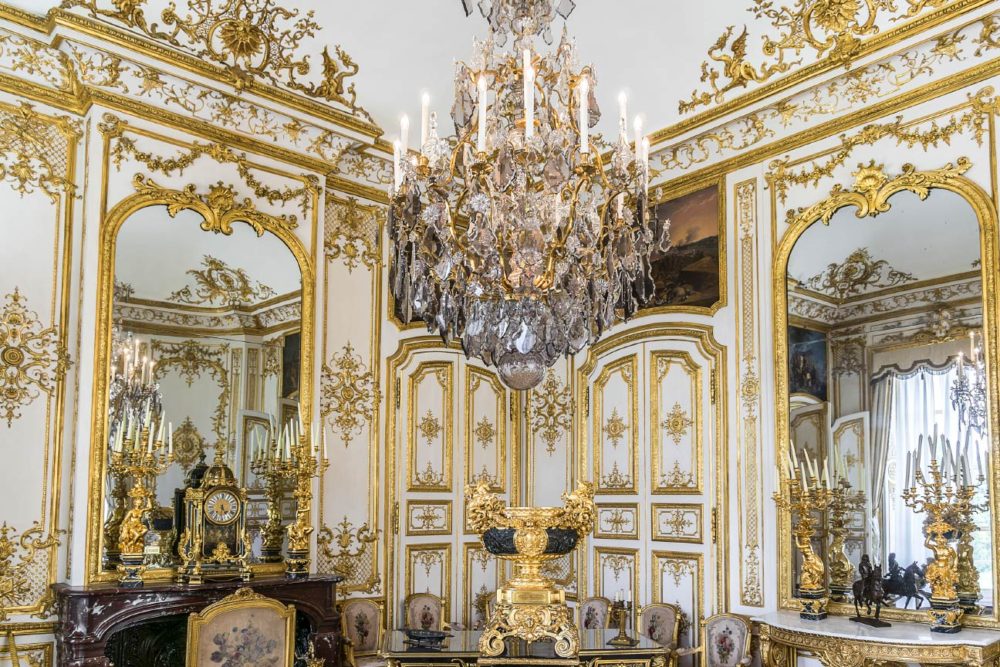 The estate’s connection with the Montmorency family began in 1484. The first mansion (no longer in existence, now replaced by the Grand Château) was built in 1528–1531 for the Constable Anne de Montmorency by Pierre Chambiges. The Petit Château was also built for him, around 1560, probably by Jean Bullant. In 1632, after the death of Henri II, it passed to the Grand Condé who inherited it through his mother, Charlotte Marguerite de Montmorency.

Several interesting pieces of history are associated with the château during the 17th century. Molière’s play, Les Précieuses ridicules, received its first performance here in 1659. Madame de Sévigné relates in her memoirs that when Louis XIV visited in 1671, François Vatel, the maître d’hôtel to the Grand Condé, committed suicide when he feared the fish would be served late.

The original mansion was destroyed in the French Revolution. It was repaired in a modest way by the last Condé, but the entire property was confiscated from the Orléans family between the years 1853 and 1872, during which interval it was owned by Coutts, an English bank. Chantilly was entirely rebuilt in 1875–1882 by Henri d’Orléans, duc d’Aumale (1822–1897) to the designs of Honore Daumet. The new château met with mixed reviews. Boni de Castellane summed up one line of thought: “What is today styled a marvel is one of the saddest specimens of the architecture of our era — one enters at the second floor and descends to the salons”. In the end, the Duc d’Aumale bequeathed the property to the Institut de France upon his death in 1897.