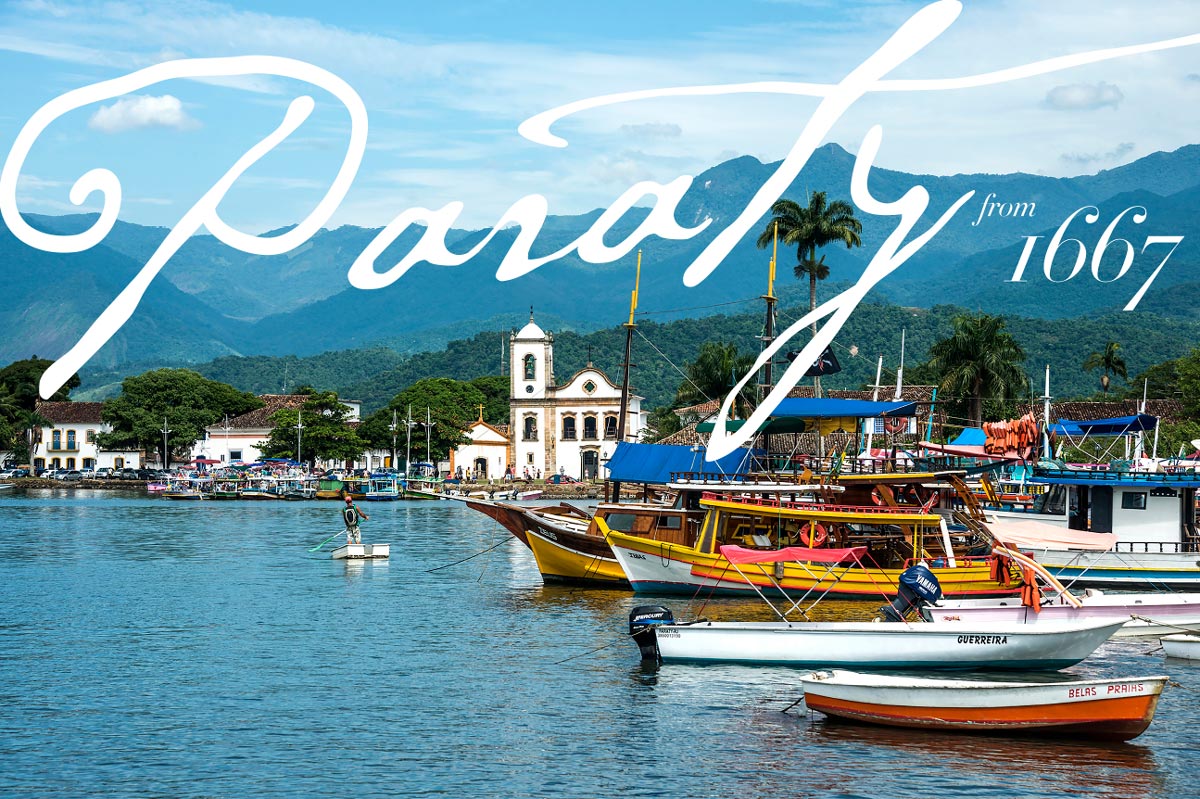 Settled by the Portuguese in 1667, Paraty is today a bucolic “village” only four hours from Rio de Janeiro.

It is located in a coastal area and surrounded by mountains and sea. Cobblestone streets, nearby native forests, waterfalls, and an emerald-green ocean make up a paradisiacal and scenic combination of beauty and nature in this little city.

At one time, the name of the city of Paraty was baptized by the local Tupy-Guarani tribe when they climbed down the mountain to fish in the ocean.

Other extensive information about the origin of the name “Paraty,” in fact, didn’t change a bit; naturally, Paraty’s referrals have been incorporated ever since by the people as the name of this beautiful coastal village.

From a little village

In the 18th century, Paraty grew due to it being a strategically important port for the gold in Minas Gerais to be exported to Portugal.

At this time, to avoid drawing the attention of pirates in nearby Rio de Janeiro, the Portuguese began to use Paraty as their best option from which to send the gold to Lisbon.

During this time, the Portuguese monarchy, according to the guidelines of the court, sent the mined gold from the cities of Ouro Preto and others using the well known Royal Road Route to export the gold and precious stones and circumvent the pirates.

Paraty became a port as well as a sleep-over town for travelers. However, in the late 1800s, after the opening of the new inner road, Paraty was forgotten, so the village lacked business and commerce. Maybe, Paraty’s destiny as a tourist center is owed to its past and the opening of the new road, and that is the beauty of this small village. Today, Paraty remains a city stalled in time. The preservation of Paraty, untouched, is credited to the lack of what we call progress. It is a beautiful old city that has discovered its destiny as a tourism destination.

Paraty is a colonial place, and it is considered a national monument due to its natural and architectural beauty surrounded by nature and rich rainforest vegetation.

To visit Paraty is indeed to visit part of a paradise lost in time. It is a city well preserved and only explored by foot since cars are prohibited in the historic downtown, which is covered by cobblestone pavements.

In the past, Paraty was home to more than 200 (sugar cane) distilleries producing rum. The city still produces one of the best rums in the country.

After the route to export gold and precious stones to Portugal during the period of Brazilian colonization had been abandoned, the lack of business created economic isolation for the village. That isolation immersed Paraty little by little into a financial disaster.
However, during the seventies, the city reinvented itself. After the opening of the highway Rio de Janeiro-Santos, finally, Paraty encountered its tourism destiny.

The incredible conservation of this city and the advent of the new road opened a new venue to Brazilians and international tourism, resulting in an economic profit. The area is very beautiful with inner peace, nature, cobblestones, old and historical houses, forests, and the ocean, which are a mix of strong appeals when we talk about unique places. It is a “must see.” It has the perfect scenario for nature-lovers.

The final destiny of Paraty

Paraty is surrounded by the Atlantic Forest, which is well-known as Mata Atlantica, which is also the National Park of Bocaina, the Environmental Protection area of Cairucu where the Village of Trindade is located, the Park Reserve of Joatinga, and the State Park of Serra do Mar. Paraty is a city that is considered a national historical monument.

Visiting Paraty is kind of like entering a town steeped in the past! The cobblestone pavement, the old houses, and the churches surrounded by a bucolic atmosphere make it like traveling in time to the history of this rare place.

By rewriting its destiny, Paraty became a weekend escape city. Just four hours from Rio de Janeiro, either by car, ocean, or buses that circulate non-stop between both towns, is the perfect option to visit and breathe the pure air and the “flair” of this little village. n