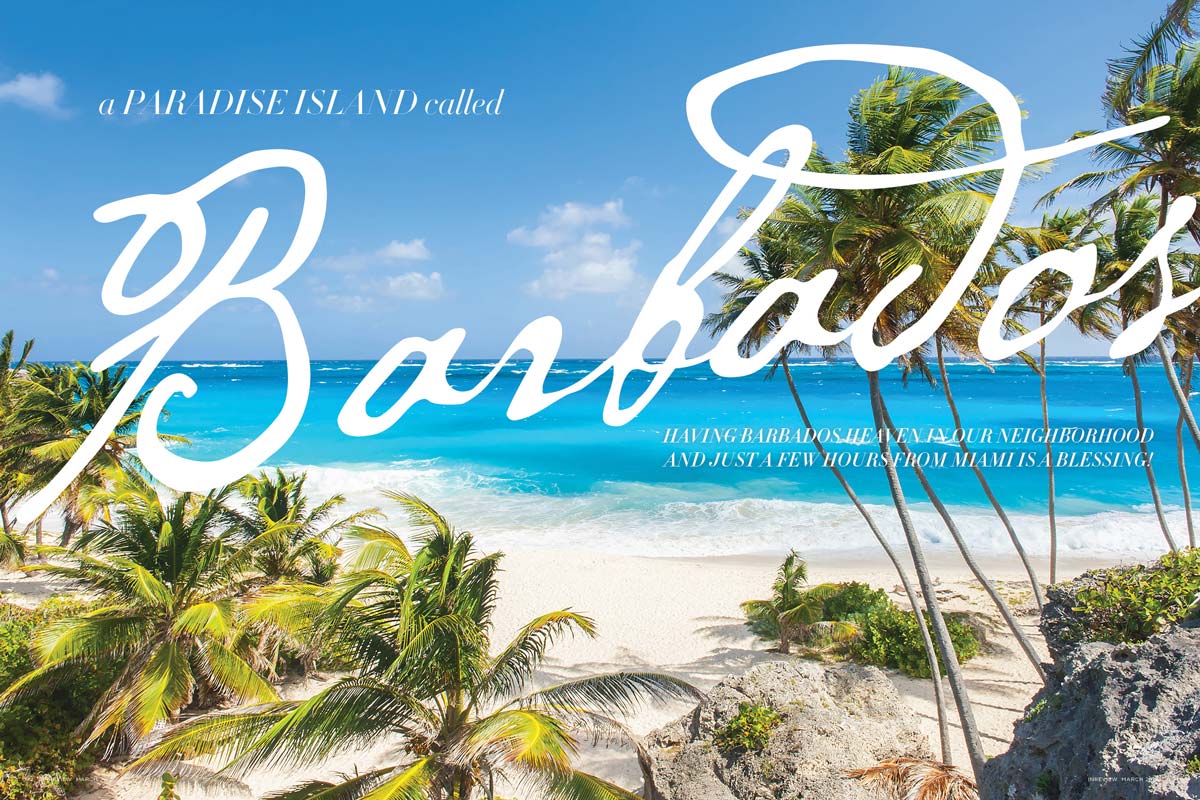 Having Barbados heaven in our neighborhood and just a few hours from Miami is a blessing!

It is the perfect escape dream to a heavenly isle. Barbados is one of the destinations -preferred places on earth for American celebrities as well as for Europeans. Before the English colonization, Barbados was inhabited by the Carib and Arawak Native Americans in the 16th century and now is an Independent British Commonwealth nation. The official language is English and Bajan Creole, a local dialect also widely spoken.

Barbados is a tiny island with a huge heart represented by its people and welcome smiles!
Surrounded by the incredibly beautiful turquoise waters, a calm ocean, and the white sand, the island offers 5-star hotels like Sandy Lane, Hilton, and Marriott among others less expensive. Bridgetown, the capital of Barbados, is also a cruise-ship destination port.
The main street carries the department store Cave Shepperd & Co, owned by the historical Duty-Free Caribbean Holdings, under Dufry from Switzerland since 1865. For such a small island there is so much surprising information about its past, including that Barbados has the first constructed synagogue “Nidhe Israel” founded in 1654.

The island is very familiar with celebrities visiting their unique paradise with plenty of lush landscapes, world-class beaches and total privacy to the ones that choose Barbados as the scenario for intimate moments. Tiger Woods (back in 2004) celebrated his marriage at Sandy Lane Resort. The romantic and private hotel was the perfect background to the ceremony for such a celebrity.

According to the 2016 census, Barbados has a population of 284,996 in an area of only 431 square kilometers. After its independence in 1996, Barbados has conquered a new space among the other Caribbean islands. The determination of its people to make their mark in the world has been proven over and over again. An excellent example of this is the world re-known singer, Rihanna.
Rihanna and grew up on Barbados but soon became a bright star in the international music industry. A challenging task. The Pop Star now has a street named after her — Rihanna Drive in the St. Michael area, a beautiful community in Barbados with luxury real estate and the Sandy Lane Hotel.

After the 17th century, the island quickly switched from the production of cotton and tobacco to sugar and cane. By then Barbados witnessed a fantastic economic transformation. Introduced by the expatriate Jewish community, the cultivation of sugar cane opened the door for the production of the liquor named at the time as Kill-devil. Barbados was the “arrival” island for refugees from Europe, especially those from the Netherlands. With more than 500 windmills installed, soon the island surpassed all the other Caribbean European island colonies producing sugar cane. By 1650, Barbados was the number one sugar producer in the world, but this position was only possible due to the forced labor of slaves.
Because of its production of sugar, why Barbados become the birthplace of rum, previously named as Kill-devil. If you go to Barbados, it is important to visit Mount Gay, the Distillery founded in 1703. The liquor produced by Mont Gay is considered one of the best rums in the world. The history of Barbados is intrinsically linked to this beverage.
Exploring Barbados

With its rich mixed culture, Barbados is considered one of the most beautiful islands in the Caribbean. A crystal clear turquoise ocean indeed is the perfect invitation of avid tourists to do absolutely nothing but relax and enjoy the many historical places such as Gun Hill Station, George Washington House or the Parliament Buildings in Bridgetown. In the year of 1751, George Washington then only 19 years old, decided to visit Barbados with his half-brother Lawrence. The future first US President spent two entire months on the island. A historical 18th Century Plantation house located in the historic area of Garrison, the George Washington House is today under the protection of UNESCO World Heritage. Barbados is the first and only place outside the United States visited by George Washington. The question is; why would Washington at 19 years decide to visit this island? What aroused his curiosity? You may discover the reason by visiting The George Washington House opened to the general public in January of 2007.

Since Barbados is surrounded by the most beautiful ocean, it is also mandatory to take a look at the underwater caves. These are essential tourist stopping-point, a dream come true for divers. From the Garrisson’s cave to the Animal Flower cave, the crystallized limestones, stalagmites, and deep crystal clear pools play a strong attraction to visitors or divers.
This island has so much to offer! Barbados is the perfect scenario and gateway to celebrate your marriage or romance in style or just to explore its spectacular beaches such as Acura, Mullins, Maxwell Bath Beach and Crane with watersports, restaurants, shopping, and their numerous festivals, from food to the rum, and races The restaurants on this island, definitely upgrade Barbados internationally. Don’t forget to visit the Oyster Market. There you will eat the flying fish like locals. n