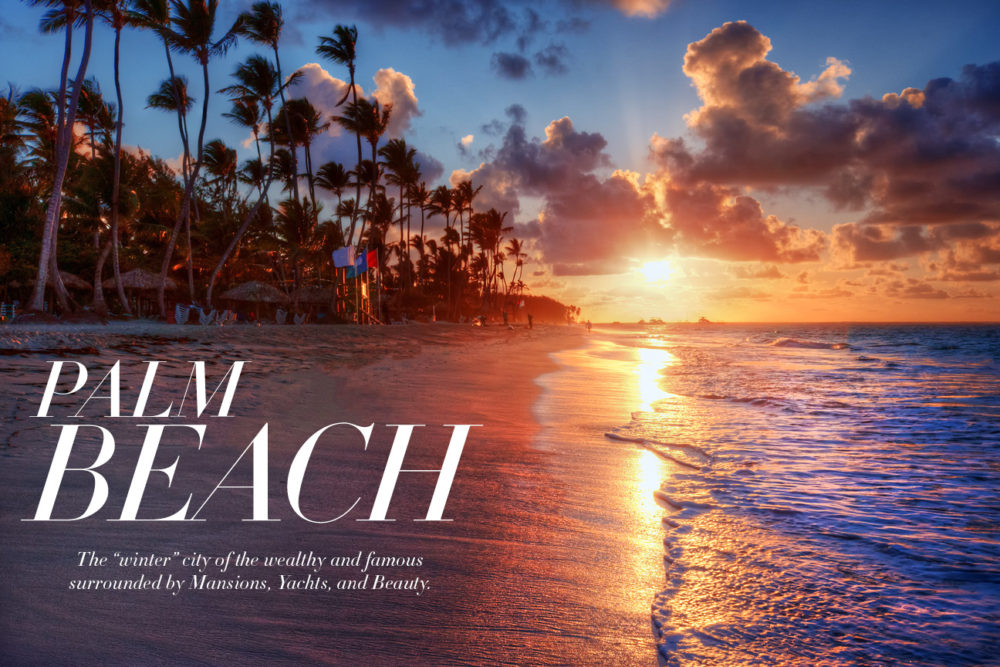 The “winter” city of the wealthy and famous surrounded by Mansions, Yachts, and Beauty.

Palm Beach on South Florida’s East Coast is one of the three largest cities in the state. A waterfront town and a city that often is associated with the wealthy, celebrities, and mansions of its residents. It is home to sunny-palm lined streets, waterfront views, upscale shoppings, super yachts and breathtaking mansions.

When talking about mansions, Mar-a-Lago pops up as one of the residences of President Donald Trump. Purchased in 1985 for less than $10 million, it is now probably worth over $300 million. Nobody can say that Trump does not have a “Goldfinger” indeed.

Mar-a-Lago then and now. From a socialite to Donald Trump

Mar-a-Lago, Spanish for Sea-to-Lake, was the creation of socialite Marjorie Merriweather Post, a savvy business woman and the heiress of the founder of General Foods. Back in 1923, she started to build the estate which opened in January 1927. Marion Sims Wyeth, the famous American architect, designed the project as well as many other mansions in Palm Beach. At that time Americans followed the style of European architecture. The well-known and respected Viennese Joseph Urban was responsible for the interior design. Due to his professional expertise and background, he created many royal palaces in Europe. Now Mar-a-Lago (part of it) has become a very private and exclusive Club and Spa.
Obviously, Palm Beach has a long history with the wealthy and famous. In the past, Michael Jackson and Lisa Marie Presley went there for their honeymoon, and John Lennon and Yoko Ono had a residence in the city. 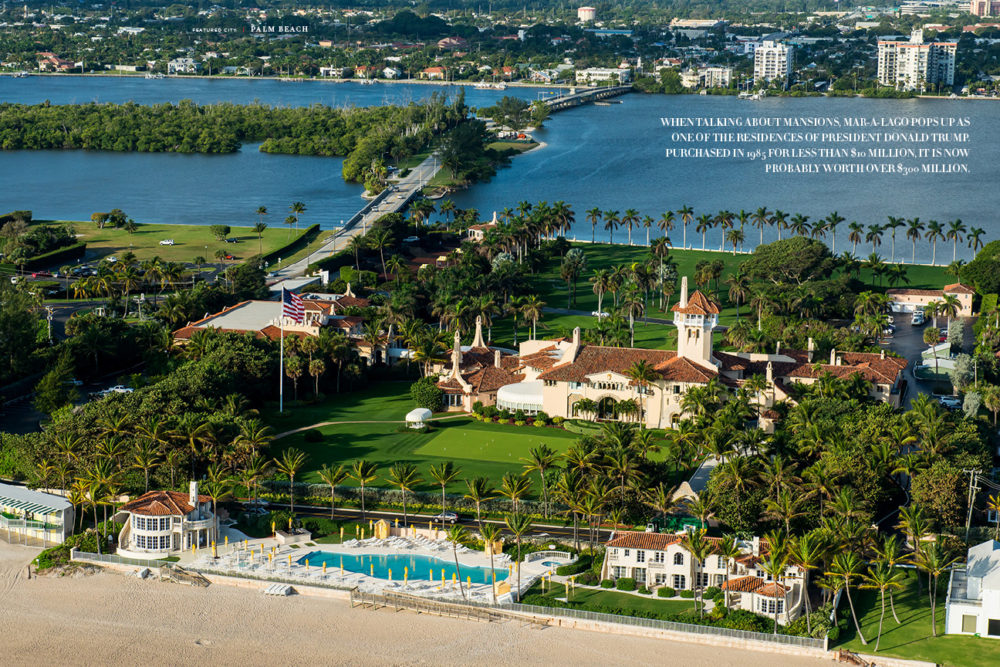 A city with European influence and the Golfers Paradise

This town with its stylish European influence, little streets such as Via Mizner and Via Parigi is a hot spot, but this city indeed offers much more to be seen. Located 116 kilometers north of Miami, Palm Beach is a well-known destination for “golfers love.” It is a players’ paradise with more than 160 golf courses, with at least 40 open to the general public. It offers resorts, culture, and nightlife, restaurants, bars, upscale shoppings with international brands in a calm environment. 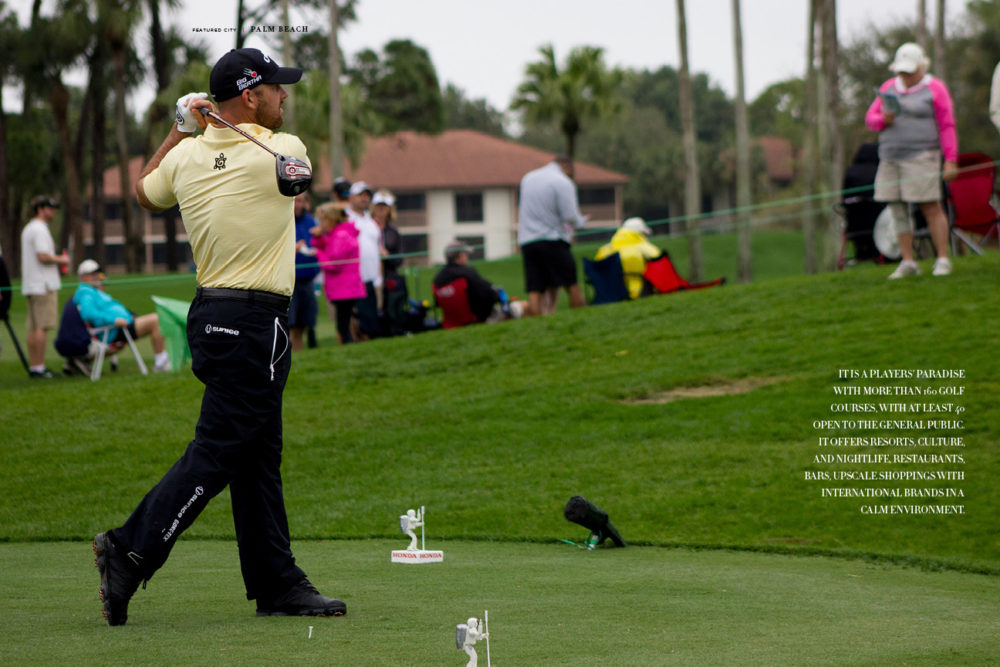 Due to the climate and agriculture, restaurants have flourished in Palm Beach and West Palm Beach. International chefs such as Daniel Boulud with his Cafe Boulud located in an elegant hotel setting. French cuisine well represented by Chez Jean-Pierre Bistro, Cafe L’Europe and the Pistache French Bistro for those who enjoy the food, atmosphere, and unique locations.

The Green Market, highlighted by locally grown produce, is another place to be visited by tourists or locals. Palm Beach is the perfect and preferred city for the snowbirds. Billionaires who have their primary residence in cold weather cities, also keep their vacation mansions in Palm Beach. They all flee from the cold. It is when heaven takes its name from Palm Beach.

Tiger Woods and Michael Jordan, the newest restaurateurs in town

Nowadays, if you are a billionaire and famous, it is possible that soon you will open a restaurant here This has been the case for a few. Tiger Woods has a residence in Jupiter, not far from Palm Beach and recently opened The Woods Jupiter. Equipped with flat screen TVs for golfer aficionados and a cellar filled with 140 wines to choose from, it is a place to see and been seen.

Michael Jordan, the NBA superstar champion, is also building his restaurant in town. These restaurants are the perfect magnet to attract fans and aficionados of the sport.

Palm Beach is also the place where you can find anything you need. The luxurious Waterside, an outdoor shopping center, has more than 60 stores in luxury goods and the best global brands. The Waterside has two anchor stores: Nordstrom and Saks Fifth Avenue. Ralph Lauren, Cartier, and Gap are just a few of the other upscale brands.The city offers whatever you need it in an upscale environment.

Going back in time, from Lake Worth to Palm Beach

The name Palm Beach has a unique history. The region was known as Lake Worth, named after Major General William Jenkins Worth, who fought during the second Seminole War. It was not a comfortable territory for the first settlers that arrived in 1872. Coconut palms were not even native to Florida. When the shipwrecked Providencia washed ashore to “Lake” Worth in January 1878 loaded with coconut plants, the settlers saved and planted the beautiful palms initiating the history of Palm Beach.

The loaded ship from Havana was destined for Barcelona; however, this ship’s cargo was the beginning of today’s palms of all sizes and varieties in the entire state. There are more than 350 species of Palms in Florida the signature frames of the sunshine estate. Henry Flagler, the biggest developer of Miami at the time, also “touched” this town. The iconic house-museum called Whitehall is what once was his winter home. Before and after he retired, Flagler built a series of luxury hotels, from St Augustine to Key West. Flagler’s name are connected to Florida for all that he envisioned for the state. The Florida Railway East Coast and the agricultural development of millions of acres, the hotels, and his progressive vision and investments. By then Flagler fell in love with Palm Beach where in 1893 he built the Royal Poinciana Hotel and the Breakers Hotel. The lush grove of coconut palms, the beautiful sunsets surrounded by water, and the envious climate are the epitome of Palm Beach. Incorporated on April 17, 1911, Palm Beach is today a world-renowned location for its beautiful sunsets, small-town city style, superior quality of life, mansions and approximately 9,000 year-round citizens and possibly 20,000 more with seasonal homes. It is the home to “Captains of Industry.” A city surrounded by 3 miles of public beaches, it is a city with a wealthy community as well as celebrities. Without a doubt, it is a city that owes its existence to Henry Flagler. After his retirement, he devoted his resources, knowledge, and energy to Palm Beach. Whitehall initially was the name of his winter home in Palm Beach, and today it is one of the greatest historical museums. 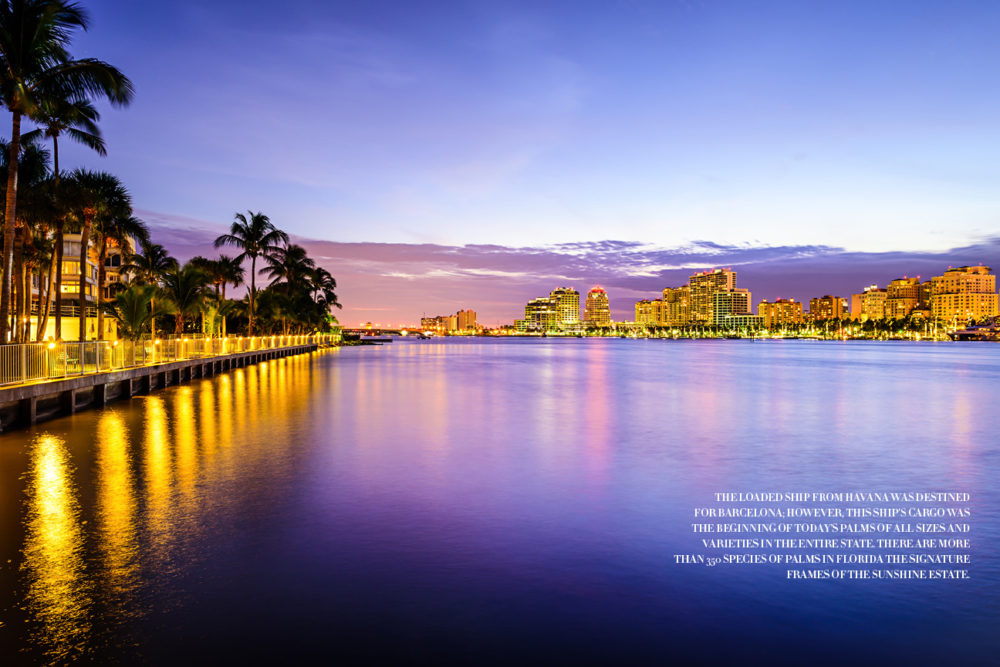 There is no other community in America where its residents donate more money per capita to charities in the country. Palm Beach, is surrounded by high levels of public safety and beauty everywhere.

It is the perfect “cocktail” — the mix of mansions, celebrities, wealthy, yachts, palms and water. A city named Palm Beach. 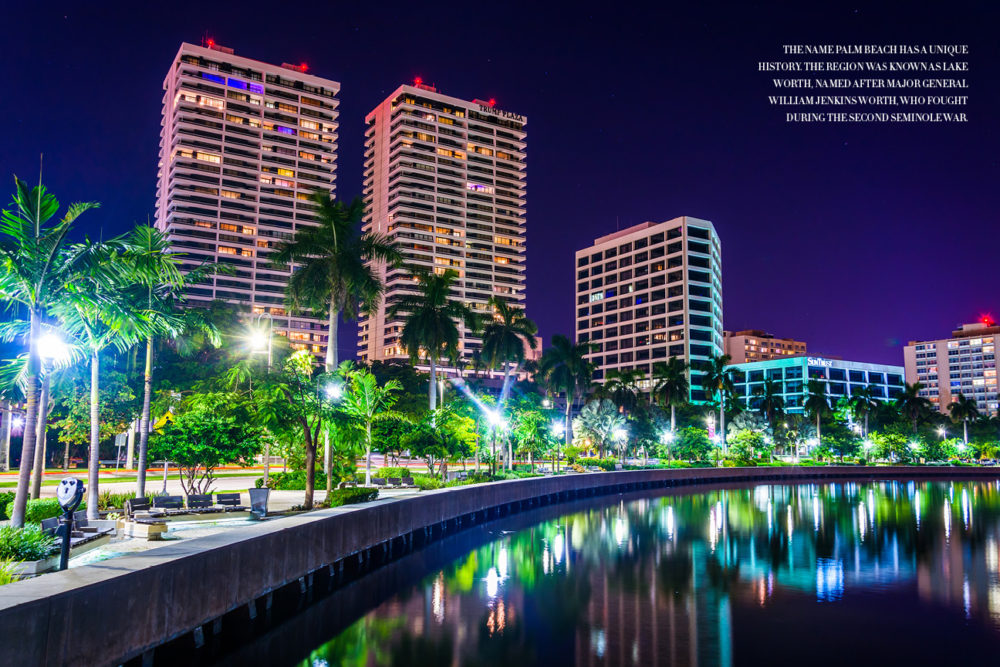