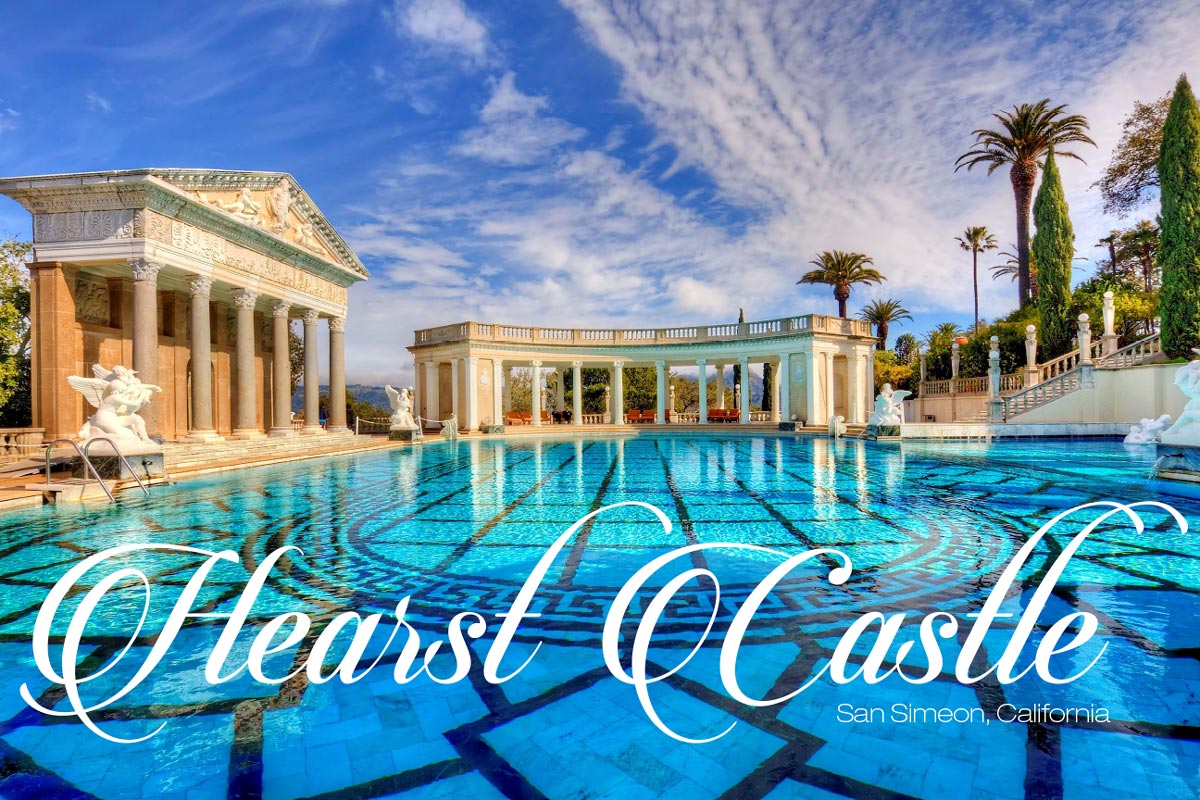 People often refer to Hearst Castle as a “museum like no other” for good reason, as it is an accredited museum, displays a fabulous art collection and is an unsurpassed showplace without equal. Art, architecture and gardens all situated on a pristine hilltop with breathtaking views of the unspoiled California coastline and surrounding Santa Lucia Mountains. If you have never visited, or haven’t been there in a while, now is the time plan a visit. Escape the ordinary and come be transported to the extraordinary. It is truly is a must-see experience that is like nothing else with its art, architecture and gardens, exciting stories of its heyday and overall wonder that it holds.

The lands on which Hearst Castle is sited was first purchased by William Randolph Hearst’s father, George in 1865 and served as the family campground until 1919 when William Randolph Hearst inherited the land with a plan to build a “modest” house. The project, headed by architect Julia Morgan of San Francisco, took on a life of its own as Mr. Hearst’s exceptional passion for building, design and collecting were harmoniously blended to showcase his collection of priceless fine and decorative art collection. This great collaboration between the builder Mr. Hearst and architect Julia Morgan resulted in 165 rooms and about 90,000 square feet of sumptuously decorated interiors. The estate was generously donated by the Hearst Corporation to the State of California in 1958 for the public to experience, learn from, and enjoy. Whether you are coming from the North, South, or East access to Hearst Castle is easy. Hearst Castle is open daily (only closed three days a year – Thanksgiving Day, Christmas Day and New Year’s Day) and can be reached from the north via Highway 101 to Paso Robles, and from the south via Cambria and Paso Robles.

Plan about 3 hours for your visit if taking one tour which includes a 40 minute giant screen film about the castle at the visitor center. It is recommended to purchase your tickets in advance, (800) 444 4445 or HearstCastle.org.

Visiting Hearst Castle is a positively mesmerizing experience, a castle in the clouds, quite literally. Any trip to the Central Coast region would be incomplete without it. Even if you have visited before, each guide is filled with new and interesting information. For more information and ticket sales, visit hearstcastle.org.

William Randolph Hearst’s penchant for collecting began at the age of ten on a European visit with his mother Phoebe Apperson Hearst in 1873. On this journey he bought many small items such as coins, stamps, beer steins and porcelains. Phoebe Hearst was also a collector and connoisseur of art and undoubtedly influenced her son who, in his thirties, began collecting in earnest, poring over auction catalogues, taking extended trips abroad, and spending lavish sums of money. He collected not only fine and decorative arts, but he also gathered manuscripts, rare books, and autographs. Later in life Mr. Hearst would build his San Simeon estate. Almost three decades of building, with innumerable changes along the way, produced an imposing main house and three smaller guest houses in the Mediterranean Revival style of architecture, combining both Spanish and Italian elements. Set among plants and trees also in the Mediterranean vernacular, the remarkable hilltop estate resembles a European village with the towered main house positioned as the central cathedral and the three surrounding guest houses as the other village buildings.

Architect Julia Morgan had encountered the structures that inspired her designs for the San Simeon estate in the course of her travels, especially through Spain and Italy. Another source for the estate’s overall tone can perhaps be found in the international expositions that took place in the United States around the time the nineteenth century turned into the twentieth.

The popularity of these World’s Fairs demonstrated a growing American interest in things cultural and international. In particular, The Panama Pacific International Exposition in San Francisco in 1915, which Hearst helped finance, may have influenced his plan for San Simeon.

That style comes through clearly in the architecture and the art of Hearst Castle. The buildings’ exteriors and interiors were made up from different antique elements, mostly Spanish and Italian, augmented with work by Hearst craftsmen. The integration of antique and modern produced a unique result. Although used in a new way, these historically rich artifacts of art and architecture formed a tangible link with the past traditions of Europe.

Striving for this link was a common theme among newly wealthy American connoisseurs in the late nineteenth and early twentieth centuries.

The prestige associated with the acquisition of art has been an established fact since ancient times. Turn-of-the-century millionaires built mansions which housed and enhanced the status of their collections. J. P. Morgan, Isabella Stewart Gardner, and Andrew Mellon acquired works of art that were destined to become the core of the major art museums in the U. S. Many pieces were probably acquired with an eye to eventual incorporation into a museum environment, with more than a passing consideration for long-term preservation, protection and ultimate public display.

Although William Randolph Hearst also provided a considerable amount of art for museums in the United States, through donation or sale, the San Simeon collection as a whole is intact, in situ, as it was at the time of Hearst’s residence. There is a vast quantity of fine and decorative art, representing numerous cultures and spanning centuries and continents. Everything was purchased with the intention that it was to be used and enjoyed. Hearst was a voracious collector with diverse interests and areas of acquisition.

The high quality of the fine art at San Simeon is echoed by the magnificent collection of textiles. Oriental carpets, many inherited from Hearst’s mother, cover floors and are used as decorative hangings. Renaissance vestments ¬ copes and chasubles ¬ adorn the walls. Altar frontals are displayed hanging above fireplaces, beds and other large pieces of furniture.

It is perhaps in the furniture collection, mostly sixteenth- and seventeenth-century Spanish and Italian, that the extent of William Randolph Hearst’s buying fervor is most apparent. The size of the estate necessitated the purchase of large numbers of objects to furnish all the rooms: chairs, tables, beds, chests, chests of drawers and armoires. As a result, there are numerous examples of many types of objects. Instead of the four or five seventeenth-century Spanish tables which might be found in many museums, at San Simeon there are forty-five, along with comparable numbers of chairs and chests. This multiplicity has proved an invaluable resource for research into manufacturing techniques and design.

In 1958, Hearst Castle was given to the State of California by the Hearst Corporation. It is today administered by California’s Department of Parks & Recreation as an historic house museum, fulfilling the estate’s potential envisioned by William Randolph Hearst when, as early as 1927, he made the statement: “I see no reason why the ranch should not be a museum of the best things that I can secure.” n