Today the America’s Cup is a global event featuring high-tech hydro foiling; wing-sailed Catamarans that are capable with speeds of more than 40 knots. The crews are elite athletes contending with the high physical extremes of sailing such high-performance boats.

The competition was equally fierce in 1851 when an American syndicate brought a radical new yacht to English shores. The schooner called America, was invited to compete in the Royal Yacht Squadron’s annual Isle of Wight regatta to win the ‘£100 Mug.’

America coasted home to victory with an eighteen-minute lead. Legend states that Queen Victoria, watching this unparalleled winner cross the finish line, asked who was second. She was told, ‘Your majesty, there is no second’. 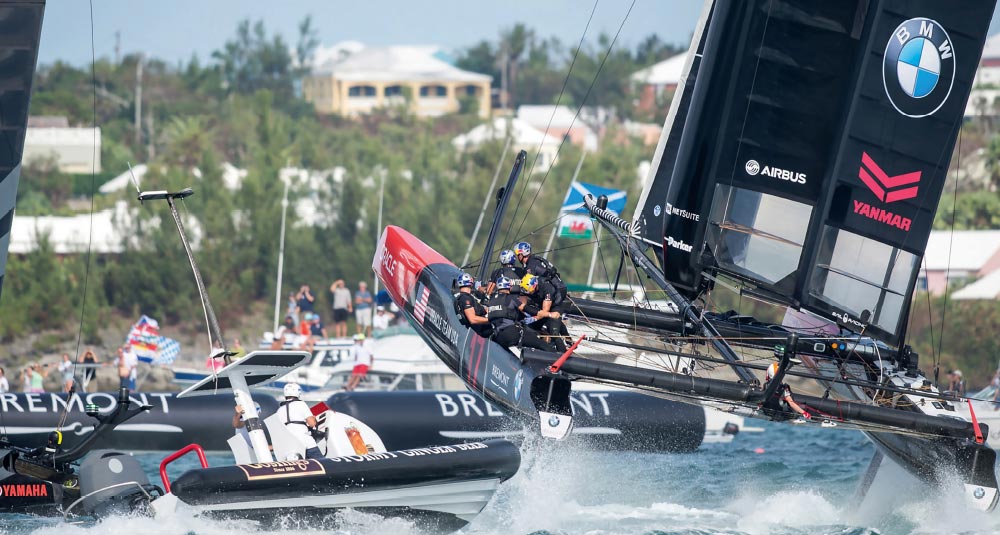 Known as the ‘Auld Mug,’ the sterling silver cup (manufactured by Garrard of London, the world’s oldest jewelers) was entrusted to the New York Yacht Club (NYYC). As a “perpetual challenge trophy to promote friendly competition among nations” alongside a ‘Deed of Gift’ that still provides the basis for the Cup’s rules and regulation. Adopting the name of the winning schooner, the America’s Cup quickly attracted challengers hoping to return the trophy to Great Britain.

From inception, the event showcased the latest developments in racing yacht design. Sir Thomas Sopwith, renowned aircraft manufacturer and designer of the legendary World War I fighter’s plane, the Sopwith Camel, used his aeronautical expertise to advance the design of his challenging J-Class yachts Endeavour and Endeavour II in 1934 and 1937. Sopwith launched an aeronautical link that remains today but failed to take the Cup. Racing ceased during World War II and resumed in 1958. The NYYC successfully defended the Cup against challengers for a phenomenal 132 years.

Growing global interest in the event necessitated the launch of a Challenger series with the winner going through to race the Defender for the America’s Cup. The NYYC’s unbroken run as Defenders ended in 1983 and the Cup finally left American shores. Alan Bond’s yacht Australia II used a radical new winged keel to take the Cup for the Royal Perth Yacht Club.

The 1980s continued to see rapid advances in racing yacht design. The first fiberglass hull entry in 1987 was swiftly followed by the first multihull when the San Diego Yacht Club’s catamaran trounced Australia’s monohull yacht in 1988.

The following decades saw the Cup switch hemispheres again, with Team New Zealand and Swiss competitors Alinghi keeping the Cup out of America for 15 years. Now a globally televised spectacle, the 35th America’s Cup will be fought in Bermuda with high-speed hydrofoil AC Class Yachts and defended by 2010 and 2013 winner ORACLE TEAM USA. Challengers include BAR, Groupama Team.