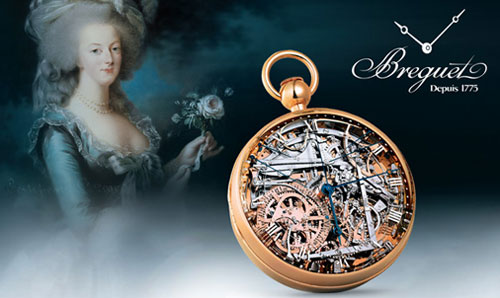 If Breguet holds a special place in our cultural heritage, it is because its founder, A.-L. Breguet (1747-1823), set the standard by which all fine watchmaking has since been judged. Today, his heirs at Breguet still make each watch as a model of supreme horological art.

A.-L. Breguet was born in Neuchâtel, but it was in Paris that he spent most of his productive life. No aspect of watchmaking escaped his study, and his inventions were as fundamental to horology as they were varied.

His career started with a series of breakthroughs: the development of the successful self-winding perpétuelle watches, the introduction of the gongs for repeating watches and the first shock-protection for balance pivots.

Louis XVI and his Queen, Marie-Antoinette, were early enthusiasts of Breguet’s watchmaking. Each watch from his workshops demonstrated the latest horological improvements in an original movement, mostly fitted with lever or ruby-cylinder escapements that he perfected.

A.-L. Breguet took refuge in Switzerland from the excesses of the French Revolution. He returned to Paris overflowing with the ideas that produced the Breguet balance-spring, his first carriage clock (sold to Bonaparte), the sympathique clock and its dependent watch, the tact watch, and finally the tourbillon, patented in 1801.

Breguet became the indispensable watchmaker to the scientific, military, financial and diplomatic elites of the age. His timepieces ruled the courts of Europe. For his most celebrated clients, Breguet designed exceptional timepieces. For Caroline Murat, queen of Naples, he conceived in 1810 the world’s very first wristwatch. Honours saluted his enormous contribution to horology. Appointed to the Board of Longitude and as chronometer-maker to the navy, he entered the Academy of Sciences and received the Legion of Honour from the hands of Louis XVIII.

When he died in 1823, all mourned the architect of the greatest revolution in the science and art of time-keeping.

Today more than ever, its capacity to innovate reflects a brand’s vitality. Breguet’s own creative powers and ingenuity have certainly not declined over time. Driven by Nicolas G. Hayek, they have indeed been amplified, resulting in Breguet filing in eight short years, a number of patent applications exceeding that of its founder’s own inventions. 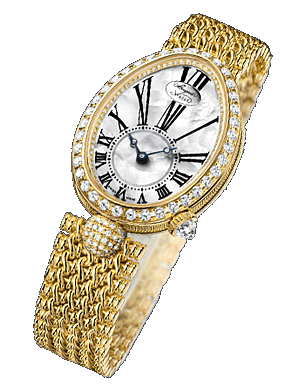 It’s perfectly natural for Breguet to stay true to women. Its watches have fascinated and enchanted some of the most prominent female figures in history – Queen Marie-Antoinette of France, the Marquise de Condorcet and Empress Josephine among them.

Breguet’s Reine de Naples collection is inspired by an early bracelet watch A.-L. Breguet created for Bonaparte’s sister Caroline, Queen of Naples. With their customary care and precision, Breguet’s watchmakers have created a symbol of feminine refinement in a contemporary jewellery watch.